Dems Hold Advantages in Air War in Senate and House;

Table 1 shows that over 34,000 pro-Democratic ads aired between August 29 and September 11 in Senate races compared to just over 29,000 pro-Republican advertisements. Slightly over 30 percent of total ads were sponsored by interest groups, a percentage that was similar for both Republicans and Democrats. Advertising in Senate races over the two weeks ending on September 11 is quite intense. The 63,000 ad airings are over 13,000 more than the over 49,000 ads aired in Senate races during the same time period in 2010, a 27.5 percent increase.

The Democratic lead on the House side is even greater over the past two weeks, with pro-Democratic ads outnumbering pro-Republican ads by almost a 2 to 1 margin, 20,554 to 10,855. This finding stands in contrast to an earlier report from the Wesleyan Media Project that showed a substantial Republican ad advantage over the entire election cycle. (Those cycle-to-date numbers also included primary ads in the early part of the year.) This recent Democratic ad advantage in House races was led by Democratic candidates, who sponsored 70 percent of pro-Democratic airings over the past two weeks.

“Clearly, Democrats are starting to reverse the early Republican lead in the ad war,” said Travis Ridout, co-director of the Wesleyan Media Project. “Forecasts of House races suggest that the Republicans will keep control of the chamber, but Democrats are working hard to hold on to–or tip—every competitive seat,” he added.

In the various races for governor, however, Republicans held an ad advantage over the past two weeks.  There were about 5,000 more pro-Republican than pro-Democratic ads.  Outside groups (including the Republican and Democratic Governors associations) have both aired upwards of 8,000 airings, but groups make up a slightly larger proportion of the pro-Democratic airings (nearly 26 percent compared to nearly 22 percent) while party sponsored airings are slightly higher proportion on the Republican side (22 percent compared to nearly 18 percent for the Democrats). 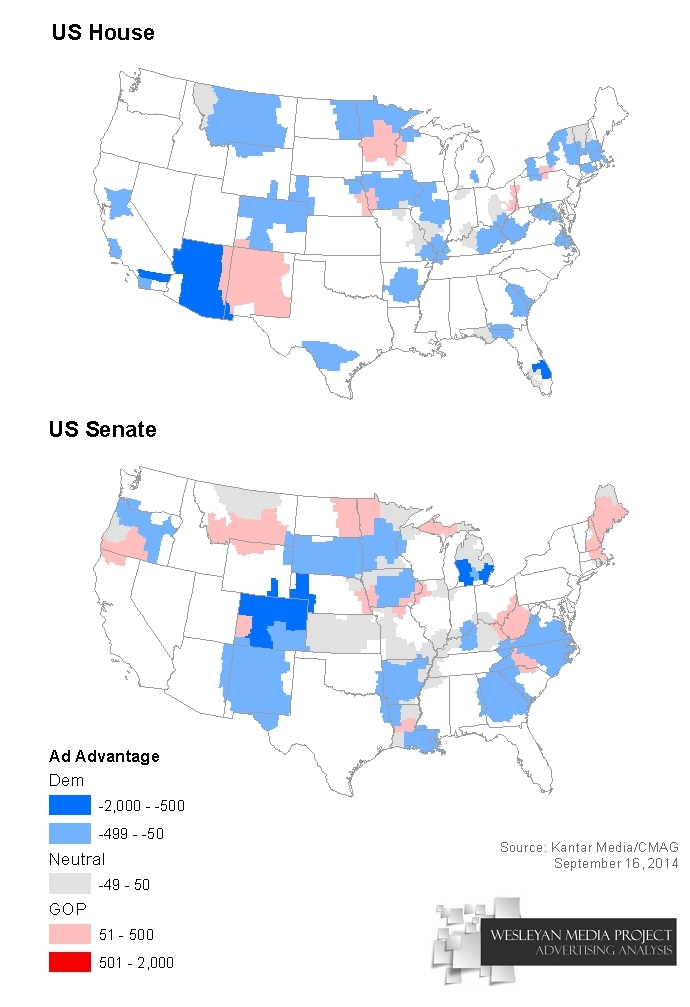 “So far the 2014 midterms are seeing increased volume and increased negativity over 2010, which is going to make citizens even less happy with the tone of the airwaves,” said Michael Franz, co-director of the Wesleyan Media Project. “Evidence from political science suggests, however, that citizens may be more informed as a result of the negativity.”

Table 2: Tone of Advertising over Time by Race Type

Table 3 shows that candidates in U.S. Senate battles this year are taking different negative strategies, with Democrats far more likely to air pure attack ads (42 percent) and Republicans airing more contrast spots (42 percent). Group-sponsored and party airings continue to be the attack dogs for both parties, though group-sponsored airings have been even more negative on the Democratic side of the aisle. In the House, candidate-sponsored airings have been overwhelmingly positive from both sides (71 percent for Democrats and 78 percent for Republicans), but parties and interest groups have been overwhelmingly negative. Overall, over half of pro-Republican airings (52 percent) were negative while only slightly over a third of pro-Democratic airings (36 percent) were negative thanks, in large part, to the abundance of positive Democratic candidate airings.

Table 3: Tone of Advertising by Party and Race Type

Table 4 shows the top 10 U.S. Senate races, ranked by the total volume of advertising over the past two weeks.  In many of the races, the Democratic candidate holds a small ad advantage, with larger Democratic advantages in Michigan, Colorado, Arkansas and Georgia.  The one state in the top ten in which pro-Republican ads outnumber pro-Democratic ads is Alaska.  The table also shows the percentage of ads in each race that are group-sponsored, along with the percentage of pro-Democratic and pro-Republican ads that were sponsored by groups.  Group-sponsored ads as a percentage of total ads are high in many of these races.  For instance, in Michigan, 58 percent of the total airings in the past two weeks were sponsored by groups, and fully 73 percent of the pro-Democratic ads were group-sponsored.

The top U.S. House races, ranked by total ads aired over the past two weeks, are shown in Table 5. In all ten of these competitive races, the Democratic campaign holds an ad advantage. The race with the most advertising was the contest for Georgia’s 12th congressional seat, which saw 3,300 ads in the past two weeks. Arizona-02 and West Virginia-03 both saw more than 2,000 ads in the past two weeks. Many of the most competitive House races saw little interest group activity, but there are some exceptions, including Arizona-02, Florida-02 and California-07.

Democratic ad advantages in the Senate and House, however, do not carry over to gubernatorial races, as Table 6 shows. In the past two weeks, pro-Republican ads have outnumbered pro-Democratic ads in Florida, Texas, Michigan, Kansas and Arizona, while Democratic ads have been more common in Illinois, Wisconsin, Pennsylvania, Maine and Rhode Island. Interest groups are most heavily involved in the races in Kansas, Maine and Wisconsin.

Table 7 reveals that Denver television stations aired the most ads over the past two weeks, some 5,600.  Denver is followed by stations in Grand Rapids, Michigan, Boston and Providence.  Over the entire 2013-14 election cycle, the most ads aired in New York City, almost 42,000.  Next on the full cycle-to-date list are Denver, Little Rock, Washington, D.C., and Norfolk-Portsmouth, Virginia.

Figure 2 shows how the volume of House and Senate advertising has varied considerably by media market over the past two weeks, with intense pockets of activity in Colorado, Iowa and Kentucky. 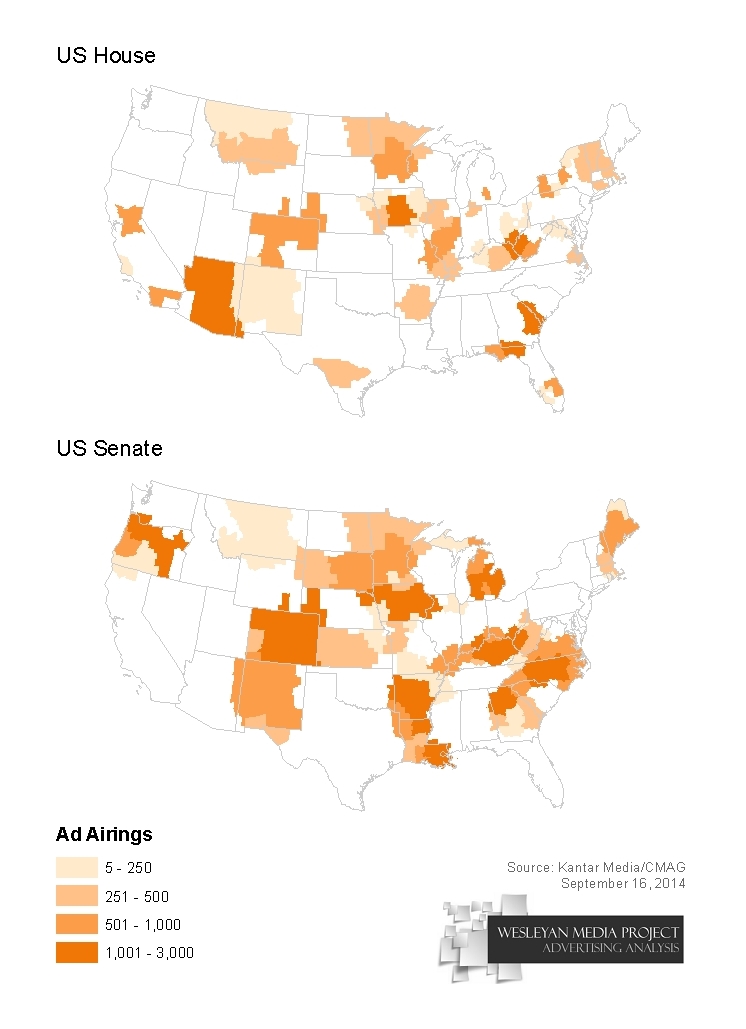 The top group advertiser in the past two weeks was the Republican Governors’ Association, which aired almost 6,400 ads (Table 8). The ads were aired in eight different gubernatorial races. NextGen Climate Action Committee, which wants to make the issue of climate change central to campaign discourse, aired almost 4,000 ads in the past two weeks in the Florida gubernatorial race and four U.S. Senate races.

The extent to which interest groups have dominated advertising varies from one media market to the next, as Figure 3 shows. 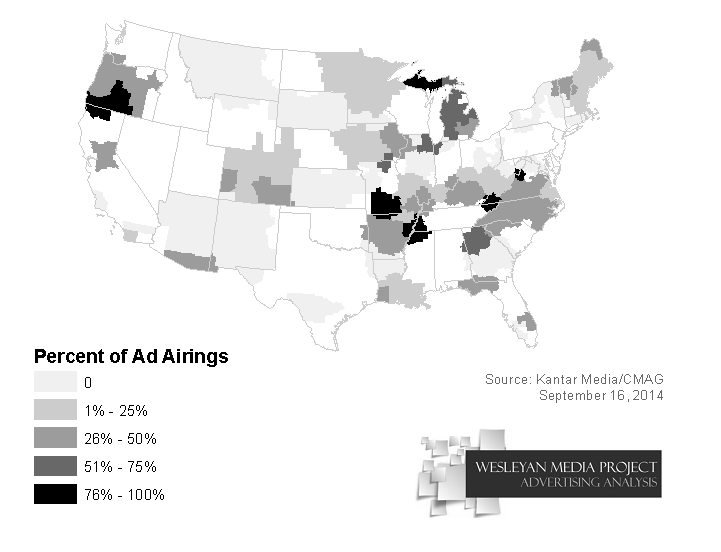 In the last six weeks, 37,544 ads criticizing the Affordable Care Act have aired, which is only 1,620 fewer political attacks than aired during the entire six-month enrollment period in which a grand total of 39,069 attacks aired (Figure 4). Furthermore, references to the health care law (including both attacks and oblique positive references) have increased in number along with the increase in campaign ads generally, staying at a steady 16-17 percent of all campaign ads over the last six weeks.

“It may not be the overwhelming campaign issue many predicted, but attacks on the Affordable Care Act are not going away. In fact they are increasing in volume as we head into the upcoming enrollment period,” said Erika Franklin Fowler, co-director of the Wesleyan Media Project. “How those attacks collide and interact with marketing ads will be interesting to watch with potentially important consequences for citizen attitudes, information and behavior.”

CITE SOURCE OF DATA AS: Kantar Media/CMAG with analysis by the Wesleyan Media Project. Data include airings from 8/1-9/11/2014